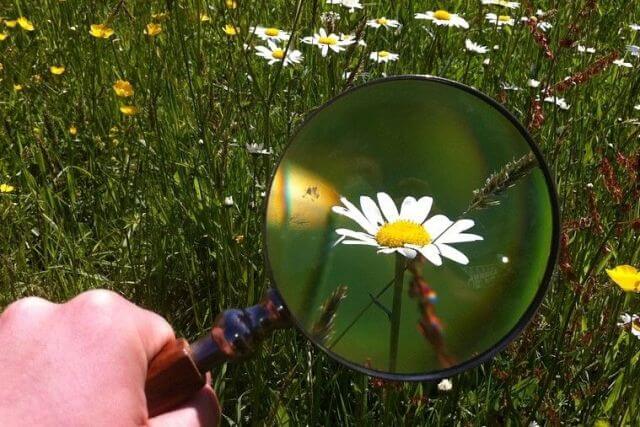 Binoculars magnify distant objects, that’s the whole point of using binoculars. For this to work, several lenses are required, which must be precisely arranged in binoculars. One of the most important lenses in this system is the objective lens, which functions as a collecting and magnifying lens. But what is a magnifying lens and how does a magnifying glass work?

How Does A Magnifying Glass Work?

A magnifying glass is an amazing tool, when held between an object and the viewer’s eye, an enlarged image of the object being viewed is perceived. It is one of the best and oldest optical gadgets that science has discovered and it has literally changed our view of the world.

A magnifying glass is a convex lens. In optics, lenses are transparent glass panes whose surfaces are curved – either inwards or outwards. A convex lens is curved outwards, light passing through is refracted and bend towards the center of the light beam and collects at the focal point. Objects viewed through a convex lens appear larger. 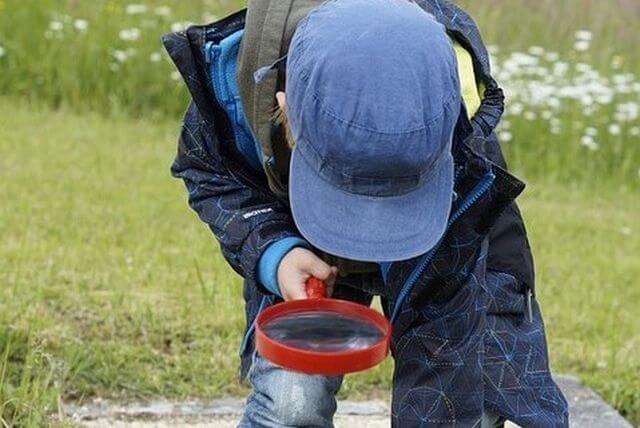 So, why does it magnify?

We all remember playing with magnifying glasses as children. Now, most of us use them daily without thinking about them too much. Many of us wear lenses in front of our eyes, they are in smartphones, cameras, microscopes, binoculars, and all kinds of optical devices. Magnifying glasses have become an integral part of our world, nobody wonders about how does a magnifying glass works.

To understand why magnifying glasses let us see objects bigger we must first investigate how we see and why objects are perceived in a certain size and why the same objects appear smaller the further away they are from the observer.

For eyes to see, it needs a light source. This light falls on objects and is reflected, our eye picks up the rays of light, and the brain constructs an image from it.

How big an object appears to us depends:

The angle between the light rays connecting lines of the outer edge points of an object and your eye is responsible for how big objects appear.

Objects seem to fill out an area when looked at. In geometry, the area an object occupies is called radians, which is expressed in the degrees of angles that can be measured between the edges. The smaller the angle, the smaller the viewed object appears.

When a concave glass lens is placed between the eye and an object, the angle of the light rays to one another changes, depending on the curvature of the lens.

Our eye process the light beam and our brain interprets through the radian, the size of the seen object. Consequently, the magnifying glass simply deceives your eye and your brain into believing that the object that you are looking at is much larger.

This explains why things appear bigger to our eyes through a magnifying glass, but is it really just an illusion? Why can we see more details when we look through the magnifying glass?

A look at the light-collecting property of the magnifying glass helps to explain this. The curved surface of the convex lens makes it possible to capture more light waves and thus increase the Angular resolution (resolving power), the ability to distinguish small structures. The resolution determines how detailed we can see an object. 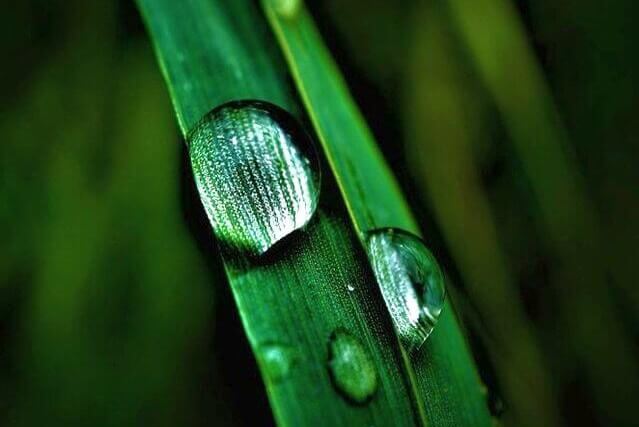 A brief history of the magnifying glass

That things will appear magnified when light is refracted was certainly already observed by the Stone Age people. Just think of a drop of water sitting on a leaf.

Egyptians have been using crystals to improve their vision of small objects. The highlight is Emperor Nero’s use of concave emerald gemstone to compensate for his near-sightedness when watching gladiators in the arena. Later, Roger Bacon was reported to use the magnifying glass for scientific purposes.

Francastoro of Verona detailed the use of numerous lenses to further boost magnification capabilities in his Homocentrica of 1535. It was one of the early thoughts of a multi-lens magnification system. Compound microscopes were almost certainly invented around 1590. Zacharias Janssen is the man who came up with the idea. Following the publication of Robert Hooke’s Micrographia in 1665, the compound microscope “gradually acquired attention,” and a frenzy of interest in microscopy erupted.

By the late 1600s, Antony van Leeuwenhoek, an unknown and untrained optician, had constructed a single-lens microscope with superior resolving power than compound microscopes. New and interesting specimens put higher demands on microscopes in the 1600s. Furthermore, by the 1700s, new optical equipment had propelled microscopy forward.

At the same time, other scholars began to use the lens to build devices that could magnify distant objects. Galileo was one of the first to come up with the idea of observing celestial objects. Two hundred years and many inventions later until Karl Zeiss filed the first patent on Porro Prism binoculars in 1893.

What is the impact of magnifying glasses on human life?

The significance of the seemingly simple development of the magnifying glass on humans is difficult to emphasize. In the years that followed, this instrument prompted a slew of significant developments.

It’s simple to understand how the first magnifying glass was adapted for use as glasses. Ultimately, it led to the invention of glasses. Glasses are still a useful utility for many people today. For example, if your vision began to deteriorate with age before the development of glasses, you had to live with blurry vision. Likewise, those born with less-than-perfect vision had few options. The eyeglasses that emerged from the application of magnifying glasses solved these problems.

Of course, eyeglasses aren’t the only invention that grew out of the magnifying glass’s basis. Roger Bacon and his innovation are responsible for much of current science. If there was no magnifying glass, the compound microscope would not exist. It is because it has been a key component of practically every major scientific achievement in modern inventions.

Much of the advances gained in medical, biology, genetics, and many other branches of research are related to the advent of the magnifying glass.

Magnifying glass as a visual aid

Applications in the medical and scientific field

You can mount magnifying glasses on stands to create microscopes. These are the tools that are used by scientists such as chemists and biologists. Microscopes also have several applications in the medical field. For example, people have been using them for blood tests and to analyze other fluids. Microscopes magnify objects thousands of times. It allows scientists to see organisms and elements of various types of matter that are invisible to the naked eye. Some microscopes have cameras built in to capture these magnified images.

Professionals such as jewelers and photographers use microscopes in their work. Loupes have three different magnifiers mounted in a plastic cylinder, are used by jewelers to evaluate gemstones. Jewelers use loupes to see flaws and impurities in diamonds, emeralds, and other precious stones that can lower their value. In addition, loupes are also used by photographers to edit and evaluate their work. A photographer is able to see the grain of a photograph through a loupe, which tells him how sharp it will appear when magnified. Camera lenses are similar to magnifying glasses in that they can enlarge distant objects in photographs. 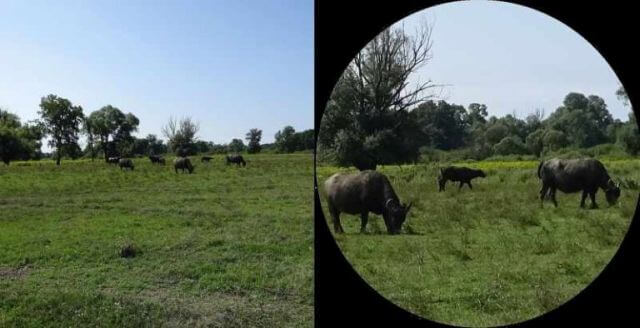 Why do things appear closer with binoculars?

You may know that binoculars are optical instruments that are used to magnify and stereoscopically see distant things. It comprises two identical telescopes set on a single frame, one for each eye. A single thumbwheel could control the focus of both telescopes at the same time, with the ability to alter the focus of each individually to account for differences in the two eyes. Binoculars are made to provide an upright, appropriately aligned left-to-right view. They are more comfortable than single telescopes because they allow natural use of both eyes, give depth awareness, and improve visual acuity by giving the human visual system two sets of data to analyze and combine.

The use of prisms

Binoculars come with reflecting prisms. The prisms revert, or upright, the inverted image produced by each telescope’s objective. They recommend a folded path for the light beams, which allows the instrument to be shorter overall. When the prisms used are of the Porro type, they also allow the two objectives to be positioned farther apart than the eyepieces, resulting in enhanced depth perception at greater distances.

The use of convex lenses to refract light has one drawback. Light rays can cross over when refracted via a convex lens, resulting in an upside-down image. You would believe that the eyepiece lens will solve this problem, but it won’t.

Porro prisms are more widespread, less expensive, and older than roof prisms. They’re the design that went into the first modern binoculars and evolved into the equipment we use today. They do, however, result in larger, heavier binoculars. Roof prism binoculars are smaller and more portable, but they are also more expensive.

Magnifying glasses, convex lenses have been used by humans since roughly 1100 A.D., although ancient Chinese people were utilizing water to magnify objects in microscopes as early as 2,000 B.C. The use of a convex lens in spectacles was first documented in the 1200s, and things have come a long way since then. Today’s magnifying lenses are far more powerful than those used with the first microscopes.

Today’s lenses and magnifying glasses are precision tools with which we can see our world in detail. Microscopes binoculars and telescopes are highly developed thanks to the latest lens technology, sophisticated glass melting knowledge, and sophisticated lens coatings that further improve the optical properties of the glass body. Optical lenses and magnifying glasses have become an integral part of our world.