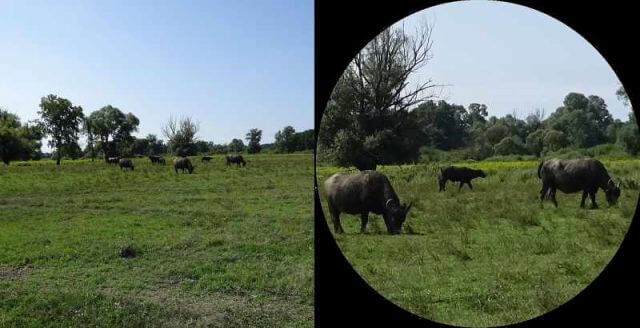 A higher magnification provides more image detail, but more may not always be better.  Although almost any magnification can theoretically be achieved, there are practical limits that are determined by the physics of light.

The magnification of binoculars and their optical performance depend on a number of factors determined by optical laws. In particular, the diffraction and refraction of light and how light behaves when it moves through different media.

What Does Magnification On Binoculars Mean?

In binoculars, magnification means the factor by which an observed object appears enlarged.

For example, if you look through 10×42 binoculars, the viewed object appears 10 times larger (or closer) than if it would only be viewed with the naked eye.

How To Calculate The Binoculars Magnification

The quotient you get is the magnification, the factor by which an observed image appears enlarged. 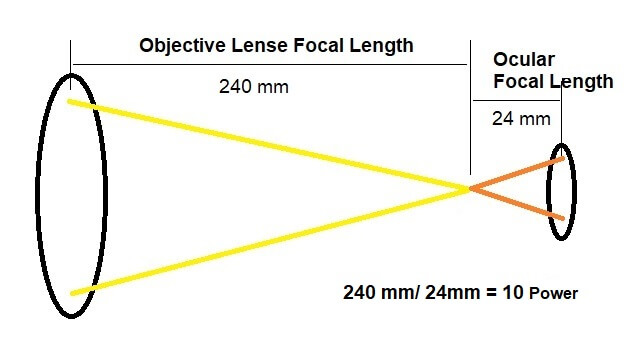 How do Binoculars Magnify

For an optical system to have magnifying properties, it needs two basic components. An objective lens and an eyepiece lens.

The second value for the binoculars rating i.e. 8x42 refers to the diameter of the lens in mm (Aperture). A larger diameter allows more light to be collected and results in a brighter image.

The projected image at the end of the focal length at the focal point is called the “intermediate image”.

The eyepiece (ocular) is the part of the binoculars you look into. It enlarges the intermediate image displayed by the lens and lets the distant object appear larger and closer for the observer.

Magnification alone is not what stands for the quality of binoculars. Just as important to produce bright, color-true, and crisp detailed images are the resolution and the twilight performance.

These qualities depend on the lens diameter, the optical glass used, the coating of glass surfaces, the overall quality, and the clever combination of the optical components.

Which is the best magnification for binoculars?

While a strong magnification has its obvious advantages of seeing things close up and in detail, there are also a few cons.

For nature or wildlife observations with handheld instruments, a magnification power of 12 or less is the most practical.

You have noticed that the majority of binoculars come in magnifications of 8x and 10x power.

What is the strongest magnification for binoculars?

There is no such thing as the strongest magnification for binoculars. Theoretically, you can build binoculars as strong as you want. You only need to tweak the focal lengths of the lens and eyepiece. But such a strong device might not be usable. The laws of optics set limits.

As you can see from the super-powerful space telescopes, there are hardly any limits to how strong magnification can be. Those mega tools for space observation have many thousand-fold magnifications. But in order for an enlarged image to show details, it needs both magnification and resolution. And it is this resolution that quickly brings us to the limits of magnification in handheld binoculars. Because for more resolution the diameter of the lens has to grow enormously.

So what are the strongest handheld binoculars?

There are handheld binoculars that magnify up to 30 times or even more. But these magnifications are not always practical in hand-held instruments and are used for specific observations. Usually in combination with a tripod either portable or even fixed. Remember the big binoculars mounted on viewing platforms where you have to toss in a coin to view the scenery for a few minutes.

Anyone who needs strong magnification would be better off with a spotting scope or small telescope.

Power or magnification indicates how many times the viewed object appears nearer. A power of 10x lets objects that are 1000 yards away appear as if they were only 100 yards away.

The most popular are binoculars with 8x and 10x magnification.

Due to the laws of optics, there is always a “best magnification”, which is the optimal compromise that can be achieved from the respective specific size of the optical parts of the binoculars.